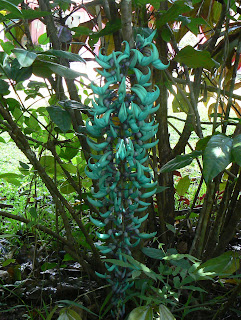 No updates for a few days - computer problems!

This beautiful vine is a native of the Philippines and is very slow to produce flowers. We planted it about 7 years ago - last year it flowered for the first time but each year so far only two bracts of flowers. This one is about 60cm or 2ft long.

Now for an update on our nesting Double-eyed Fig-Parrots. A few of days ago I took this other shot of the male while he was again feeding his mate as she sat on her eggs - she makes a 'chirring' noise when she's demanding to be fed. She had been in there for about three weeks! Then yesterday afternoon we heard a slightly different sound and when we went out to look saw both male and female taking turns to fly up and feed the chicks. Unfortunately the camera wasn't handy but I hope to get a shot of the female outside (she has the pale cheeks whereas the male has red ones).

Australia has three species of Double-eyed Fig-Parrots and these are race macleayana and they range from Cooktown to the north of us down to around Mackay. 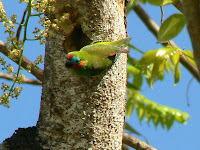 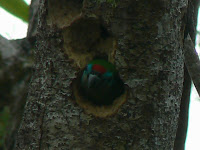