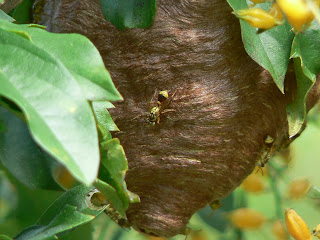 These tiny wasps, which are only about 1cm or just under half an inch long, are quite docile unless they are disturbed ... then watch out! I think they are a variety of Paper Wasp and build their nests in the foliage of various tr 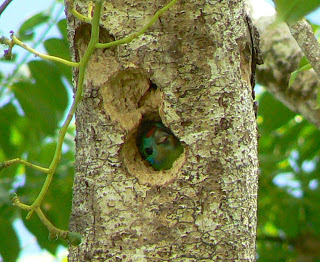 ees. If you are unfortunate enough to happen to brush up against one they strike with unbelievable speed and give a very painful sting.

It's another magical Daintree day and the Fig-Parrots are furiously feeding their chick (we're now pretty sure there is only one) - I took this photo a few minutes ago and you can now see that it is a female - we guess it won't be long before she takes wing.

Any day now we are expecting the return of the magnificent Buff-Breasted Paradise Kingfishers as they return from wintering in Asia. Last year we had at least five nesting pairs and as they often return to their old nests (which they build by excavating holes in termite-mounds) we are hoping most of them will be back. Watch this space!
Posted by Unknown at 10:30 AM