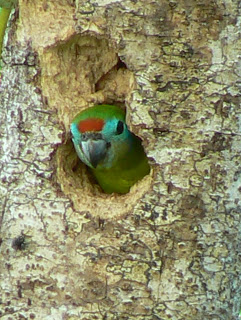 We thought we were hearing things but the Double-eyed Fig-Parrot's nest (see earlier posts) is definitely in use again! Here is the female sitting inside the nest and the male is once again busily feeding her.

According to a local birding expert it's not unusual for them to nest twice in a season, using the same nest.

-----
We now have at least two pairs of Buff-breasted Paradise Kingfishers on the property. We often see a flash of blue with the very distinctive white tail but I haven't so far been able to take a sitting shot.

So far we have only found this nest which was also used last year. The birds apparently have a good relationship with the termites and will only return to a termite mound which shows signs of occupation. When the birds leave the ants rebuild over the nesting hole and in fact you can just see that this brand 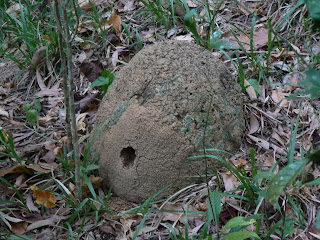 new hole has been created in the 'repaired' part of the mound, which is about 18 in high.

The birds only returned last week and the hole appeared two days ago so they aren't wasting much time!
Posted by Unknown at 11:39 AM

I have never seen a picture of a wild fig parrot. Thank you for sharing it!

Thanks for the fig parrot pic - sweet!

Thank you Carrie and Trent!