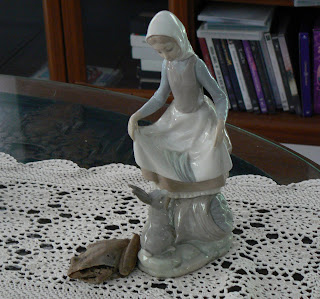 A new ornament on the coffee table - the Tawny Rocket-Frog who normally lives in the wine-rack(!) seems to have needed a little company and has spent the past two days cuddled up next to the rabbit and the lady!
Posted by Unknown at 9:03 AM 1 comment:

Not much fruit is in season at this time of year although it won't be too long until the Rambutans turn red from their plump spiky green stage - of course the birds are into them already, and they are a fruit which must stay on the tree to ripen. With a bit of luck there may be a few left for us!

The only fruit fully-ripe are the Tahitian Apples and if you remember on one of my earlier photos of the Double-Eyed Fig Parrots' nest (you could check the archive if you like) there was some yellow blossom on the tree.

Well, this is the fruit next to the old nesting holes. These are still a little green and will become yellower as they ripen - they have a sweet/sour taste and have a spiky kernel. They also have a multitude of names! 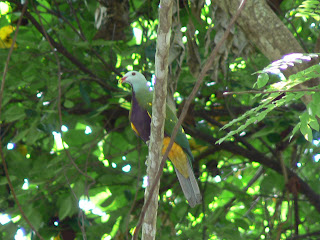 We still can't believe this incredible weather! Beautiful sunny hot days when normally it should be raining!

The other day we heard a soft 'crunch' against the flyscreen (our house only has a few glass windows and the rest are just insect-screens) and we looked out in time to see this magnificent Wompoo Fruit-Dove, happily uninjured, fly into a tree just outside the house. A few seconds later it was joined by it's mate. Such beautiful birds, they grow from 35 to 50 cm and have an amazing deep call which sounds just like their name -"wom-poo". 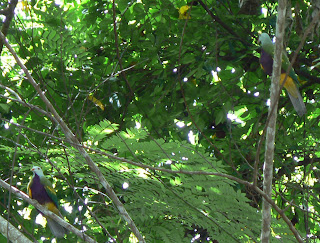 We continue to be blessed with great weather here in the Far North and can hardly believe this is supposed to be the middle of the Wet season! The whole of Queensland breathed a sigh of relief when Cyclone Hamish fizzled out from a potentially deadly Category 5 and headed away from the coast. 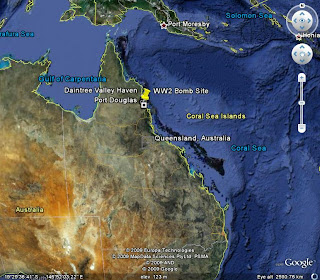 If you're not very familiar with Aussie geography here are a couple of Google images - above is the whole state of Queensland with Papua New Guinea to the north. From Daintree (yellow pin) to the top of Australia is about 800 km and from here south to Brisbane, which is not marked but just above our southern border, is almost 2000 km.

It's a big country! Above is a close-up of our Daintree region and below, this fun map might give you an idea of just how big it is in relation to, from the top, the UK and from left to right Germany, New Zealand, Japan and Texas!!! 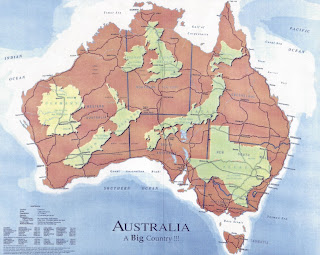 Posted by Unknown at 3:08 PM No comments:

Beautiful days - and the gardening continues

A sigh of relief the other day as Cyclone Hamish passed us offshore on it's way down the Queensland coast - all we had were a few welcome heavy downpours to keep everything growing madly but we feel for the folks further south in Queensland who are in danger of suffering major damage and flooding if this severe cyclone crosses the coast.

This is the time of year when we are accustomed to a lot of rain and the very occasional cyclone and we are closed to guests for most of February and March which gives us a chance to have our own holiday. But this year most of the heavy rains have (so far) missed us and March has been even more magical in Daintree!

Being 'closed' gives us a chance to get everything back into shape before our next guests arrive in a couple of weeks' time, and we don't have to worry that our machinery will wake anyone up!

Everything grows so incredibly fast that sometimes drastic pruning measures are needed! 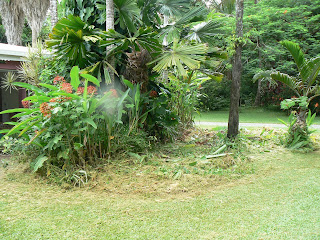 This time last year Peter you can see where Peter had run the tractor and slasher over part of the garden next to our house (above) ... 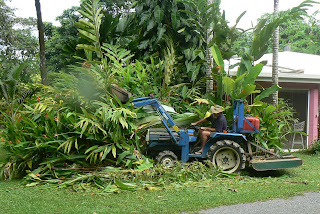 ... a year later he's doing it again, and in no time it'll all be fully grown once more!
Posted by Unknown at 4:41 PM No comments:

Home again and slowly getting back to normal! I'm sorry for the lack of updates but while there was good satellite coverage on the ship it was very expensive!

Our holiday to Bangkok and cruise back to Sydney on P&O's "Arcadia" had it's highs and lows - a fun cruise on a "long-tail" boat on Bangkok's canals:- 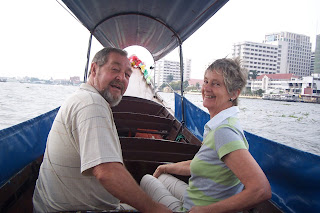 catching up with dear friends Peter and Elaine on the ship (below) - we all met on a previous cruise and they flew over from the UK to join "Arcadia" in Thailand:-

and meeting up with the ship's Captain, Commodore Steve Burgoine, an old friend from years ago when I was working for P&O as a Woman Assistant Purser (how politically-incorrect that sounds now!!!) - he was then 4th Officer on "Orcades" when I'd just met (my) Peter who was a passenger on the same ship.

Very unfortunately Peter got sick with a terrible sore throat in Bangkok and was then laid up for half the cruise with a serious infection and needed three doses of antibiotics - it really put a damper on things, and was of course especially frustrating for him.

Normally February and March are our wettest months but this year January was very wet, February was drier and now we have had no rain at all for a week. Yet further south in Queensland and over to the northwest in the Gulf country they have had devastating floods and our hearts go out to the poor souls who have lost their lives and others their homes in Victoria's terrifying fires.

At least while it has been dry we've been able to do lots of lawn-mowing and pruning - we are staying 'closed' to guests for a little longer so we can catch up with annual odd-jobs and maintenance. 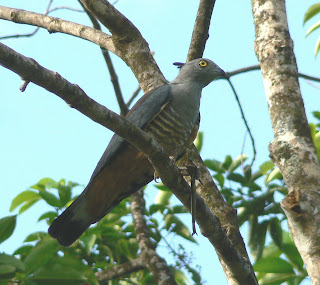 It's wonderful to see all our wildlife around us again - the Buff-Breasted Paradise Kingfishers are still here although they will soon be leaving to migrate to New Guinea, and when I strolled our walking track the other day there were three Swamp Wallabies and then I spotted this Pacific Baza (Crested Hawk). You can just see that it has something in it's claw but we can't make out what it is - being a bird of prey it could perhaps be a large stick insect or part of a small animal. This Baza was probably about 16" or 40cm in size - they grow up to 45cm with a wingspan of about 80cm.

We are so happy to be home again! We love our beautiful property so much and whenever we leave it for a while we come home and see it with fresh eyes again!
Posted by Unknown at 3:34 PM No comments: