Not much fruit is in season at this time of year although it won't be too long until the Rambutans turn red from their plump spiky green stage - of course the birds are into them already, and they are a fruit which must stay on the tree to ripen. With a bit of luck there may be a few left for us!

The only fruit fully-ripe are the Tahitian Apples and if you remember on one of my earlier photos of the Double-Eyed Fig Parrots' nest (you could check the archive if you like) there was some yellow blossom on the tree. 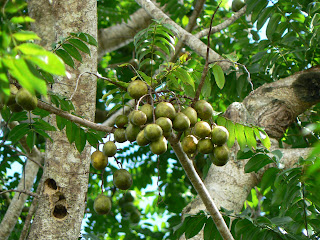 Well, this is the fruit next to the old nesting holes. These are still a little green and will become yellower as they ripen - they have a sweet/sour taste and have a spiky kernel. They also have a multitude of names!

Ever try to make pickles from this fruit? Its yummy.

Hi FJL - no I haven't but it sounds interesting! Do you have a recipe?

Try this :
50 or more of this fruit
half cup of coarse salt
1 cup of sugar
half cup of brown sugar (if unavailable, its okay)
4 hot chillies if you like
2 liters of water
1 teaspoon of fine salt

method :
1. Peel and wash the fruits (the ripe one) and soak them in salt water overnight.(you can start step 3 while waiting for tomorrow)
2. wash the fruits again after the night.
3. boil water, put in the sugar, brown sugar, fine salt and chillies.
4. when the boiled sugar water is cool, pour it in a jar and put in the fruits.
5. Place the jar in the fridge for about two days or more before tasting.
Good Luck and Happy Trying..
Btw the fruit is 'buah kedondong' in my place.

Thanks FJL - I've just picked some fruit to try out your recipe but unfortunately the fruit-flies have got there first and every one is stung! We don't like using chemical sprays on our fruit so it's a constant battle in the tropics! Perhaps next season will be better.