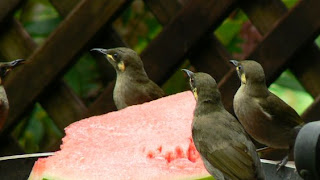 A feeding frenzy outside the kitchen!  We've just put new frypans in the cabins and the old ones now make great bird-feeders.

The Yellow-Spotted Honeyeaters think it's great and have created almost a monopoly, especially when bananas or watermelon are on the menu. 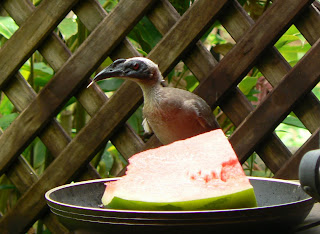 Just had a giggle because these four were watching a Helmeted Friarbird - almost twice their size - becoming more and more frustrated because it was behind the lattice and trying to squeeze itself through.  Finally it managed it!

What strange weather we're having - it's the warmest, wettest July we've had for years and today's the first day we've seen the sun for a long time now.  But at least everything is soooo green!
Posted by Unknown at 11:59 AM

It's dry here maybe we will get some rain in September if we are lucky our mousebirds love banana also :)

Cametocapetown.com provides a wide range of self catering apartments, luxury villas,and hotels to meet every need & budget.
cape town apartments
“Interesting post,Wow! it's nice pictures, we shall be following your blog more closely in future! Best Wishes from Cape Town”