The face at the window 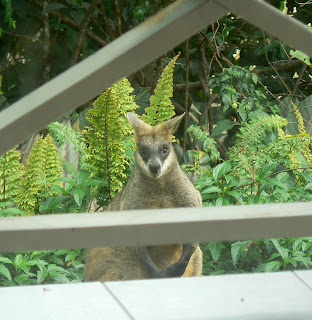 Looked out of the bedroom window the other day and found I was being observed by a little Northern Swamp Wallaby!

Got the camera and went outside and he (I, er, could see it was a 'he'!) calmly watched me for a while and then went back to munching on some leaves.

Guests often spot one or two of them on our walking track although sometimes they hide in the long grass until they get close and then suddenly take off through the bush ... a few folks have had the fright of their lives 'cos they can't see what they've disturbed! 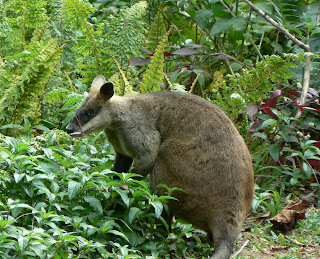 We don't have many fruits in season at the moment - only some white Star Apples - but later on when we'll hopefully have bumper crops of lychees, mangoes and carambolas (star fruit) the wallabies will have a ball eating the dropped fruits.