Return of the Flame 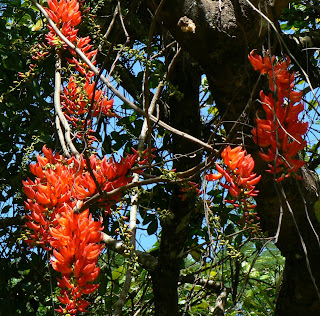 A first glimpse of red amongst the trees in front of the house and there are the first bracts of this year's Flame of the Forest Vine ... and also the first as-yet-unopened flowers of the beautiful Jade Vine.  Both of these tropical vines have hundreds of flowers coming on so it promises to be a really spectacular display this year, much to the delight of our guests - already lots of photos taken!

Posted by Unknown at 5:40 PM No comments:

Labels: Flame of the Forest, Plants

The early-morning birds have been fairly quiet lately with our cool winter mornings but at dawn this morning it sounded like an "Oriole Convention" - several of our Yellow Orioles with their amazingly varied calls, creating an incredible chorus in the trees outside our bedroom.  I've just found this lovely little track on YouTube - just imagine the sound of half a dozen or so of them!

http://www.youtube.com/watch?v=bGyol_Dc3JA
Posted by Unknown at 8:54 AM No comments: 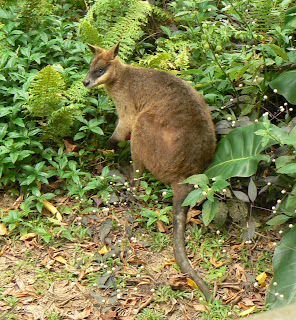 Can't believe it's 5 months since my last blog in February!  Where has this year gone to?

It's been a roller-coaster since then as at the end of February Peter had a mild heart attack on our NZ cruise and we ended up in Auckland for 3 weeks where he underwent a (thankfully, hugely successful!) quadruple bypass.   Fit as a fiddle now apart from a cracked rib from tripping over a step!  Mind you he now has a new cardiologist as his last one, just before we went on holiday, said he was so happy with him not to come back for another 5 years!!!

Also a hugely successful year for Daintree Valley Haven - after several quiet years this one is storming along with loads of delightful guests.  Really keeping our noses to the grindstone!

As a result I've been mainly concentrating on our Facebook Page (http://www.facebook.com/daintreevalleyhaven) however we have been asked to 'keep blogging' by guests who are not 'into' Facebook so I'll endeavour to find time to get the camera snapping again for some more, hopefully, interesting Daintree images.

This little fellow is a male Northern Swamp Wallaby which, with Mum and Joey, are currently often seen around the house and the cabins - this was taken from the office window a couple of weeks ago.  You can just see on his left 'elbow' a nasty red wound which, a few days later, had swelled to an enormous size and he had lost all condition and we really thought he was doomed.  We were absolutely thrilled the other morning to see him again (outside the office) looking very healthy and with the wound looking much better.

So a couple of good-news stories to start the blog rolling again!
Posted by Unknown at 10:29 AM No comments: